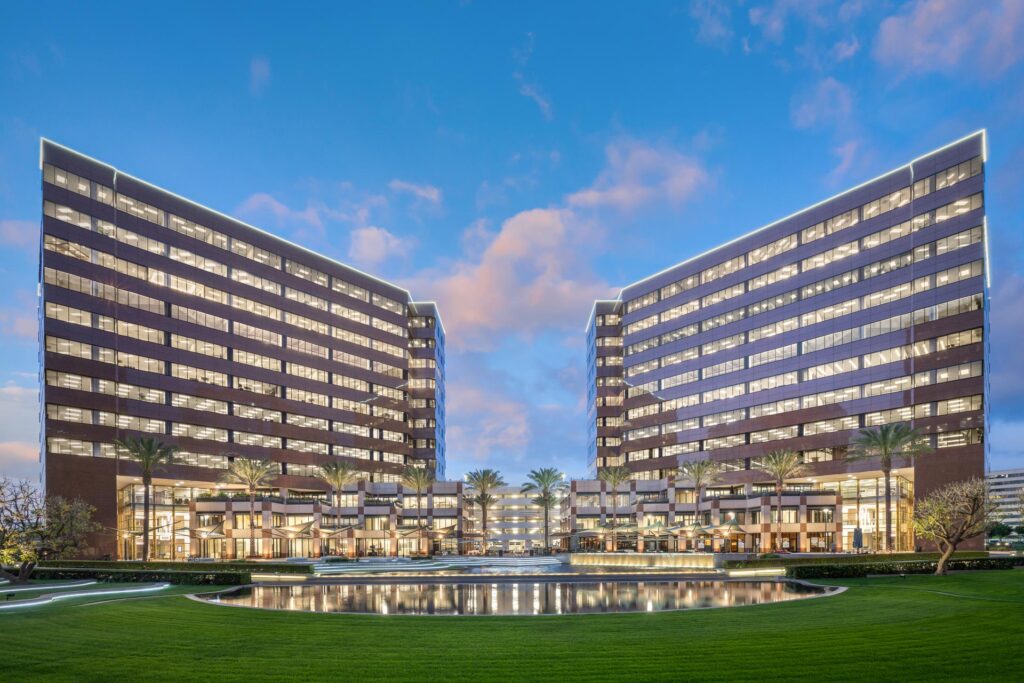 One of Irvine’s larger office complexes near John Wayne Airport has a new ownership structure, following a recapitalization deal that values the two-tower property at nearly $190 million.

The recapitalization deal marks the latest change for the 625,000-square-foot office and retail complex, which has undergone extensive renovations and upgrades since Emmes bought the property in 2017.

Oaktree’s involvement in the project comes as the two 12-story offices buildings-at 1920 and 2010 Main St-continue to get revamped, along with a collection of restaurants being added next to the property’s parking structure.

“We’ve been impressed with the renovations to date and look forward to partnering with Emmes on the remaining improvements to the project,” said Mark Jacobs, managing direc­tor and co-portfolio manager with Oaktree.

“Centerview offers the type of workspace environment that companies will be looking for as they return to the office such as up­graded building systems, indoor/ outdoor gath­ering spaces and an expanded amenity base,” Jacobs added.

The mahogany-colored offices are part of the 48-acre Irvine Concourse development, a 10-building campus that also has a pair of ho­tels and an Equinox Sports Club.

The recapitalization, one of the larger trans­actions of its kind reported in Orange County’s office market since the onset of the pandemic, values Centerview at about $188 million or $311 per square foot.

Oaktree’s new stake in the property was undisclosed.

The buyer was reported to have taken out a $162.1 million loan from a financing unit of New York private equity firm KKR & Co. to fund the 2017 deal.

The most the complex has been valued at since 2008 is $211 million, according to CoStar Group Inc. records.

The recapitalization is the first partnership between Oaktree and Emmes.

Oaktree has plenty of familiarity with Or­ange County’s office market, having partnered with the local office of Hines for numerous area deals over the past decade or so, including the 4000 MacArthur office towers a few miles away.

“The depth of their relationships dovetails well with Emmes’ operational expertise and our collective vision for Centerview.”

Centerview is Emmes’ only local holding; it previously owned the 4000 MacArthur com­plex, which was sold to Hines and Oaktree in 2015, as well as Irvine’s Michelson office tower at Park Place. It has other holdings in New York and New Jersey.

The twin 12-story offices, dubbed Center­view East and Centerview West, were built in 1987.

Emmes first kicked off renovations at the project shortly after acquiring it, and wrapped upgrades to the exterior plaza in March of 2021. It added new outdoor spaces, common areas and restaurants, including Porch & Swing, a contemporary restaurant concept led by head Chef Justin Werner, a former winner of reality cooking show “Chopped” and a former chef at Santa Ana’s Playground restaurant.

Upscale Mexican restaurant Sol will open at Centerview this fall, replacing El Torito Grill, while the former McCormick & Schmick’s restaurant space has been converted to Eight­een Main, a 17,000-square-foot comer retail parcel that will house three to four additional restaurants.

The company said these renovations have generated new tenant interest despite the pan­demic, with north of 100,000 square feet of new leases inked over the past year.

Oaktree and Emmes said they plan to con­tinue to invest in the property, including me­chanical equipment upgrades to improve building efficiency; the addition of a dedi­cated valet area to service new restaurants at Eighteen Main; common area upgrades; and additional balcony upgrades to “further inte­grate indoor office spaces with the abundant outdoor elements at Centerview.”

“During the pandemic, most outdoor spaces have rendered the best accommodation for work and safe social engagement. With such a large plaza at Centerview, proper distancing is not a problem,” said John Hill, principal of Robinson Hill Architecture, which oversaw the recent upgrades at the complex.

“The idea of living, working, and social­izing all within walking distance makes open space and common social venues like the one at Centerview even more critical,” Hill said.