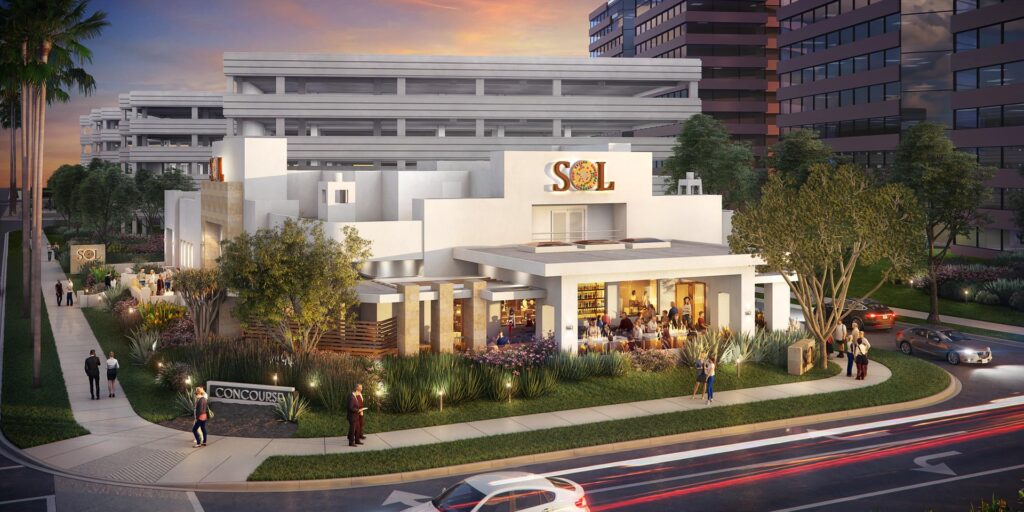 An all organic vegetarian drive thru burger joint, a fine dining room following the Baja Mediterranean trend and new locations of favorite places like Sol Mexican Cocina, Zov’s and A Restaurant — there’s a lot to look forward to in 2022 for foodies seeking new places to try. Here’s a roundup so you can keep an eye out for these highly anticipated eateries.

A new concept called Detention will be led by Bob Quinn, Dooley and Parker, who have been running Playground. Menus will change seasonally and the original Playground bar will be a lounge area offering “omakase cocktail experiences and bar snacks.”

Playground 2.0 has been turned over to Werner who has developed an 18-seat chef’s table concept called Trust, which opened Friday, Jan. 7 with tickets available through Tock. Werner had worked at Playground with Quinn previously. Most recently he was chef at Porch & Swing in Irvine.

Hungry? Sign up for The Eat Index, our weekly food newsletter, and find out where to eat and get the latest restaurant happenings in Orange County. Subscribe here.

Xperience Restaurant Group — the owner and operator of El Torito, Chevys Fresh Mex, Sol Mexican Cocina, Acapulco and Las Brisas — announced in May that El Torito Grill in Irvine will be transformed into Sol, undergoing a multimillion-dollar renovation.

The new Sol’s menu and pricing will be similar to its Newport location with signature dishes such as Taco Vampiro and Wild Fish on Esquites with almond-lemon crust, grilled corn esquites, tomato, basil, lime, avocado butter and cotija cheese.

Sol is well known for its tequila cocktails including its house margarita with fresh citrus juices, agave nectar and tequila, and agave spirit-based drinks like The Mezcalero, a concoction of mezcal shaken with passion fruit, guava and lime juice.

Xperience Restaurant Group, which already has Solita locations in Valencia and Huntington Beach, announced in October that a new store is slated to open in Anaheim, near Angel Stadium.

The more than 6,800-square-foot restaurant will seat 300 diners inside with room for 68 more on the patio. Favorites, such as Pork Belly Dorado Taco and Vampiro Taco, will be served along with grilled corn elote, nachos, carne asada and more.

Solita’s bar will serve agave spirit-based drinks including a margarita with house-made sweet and sour mix and a blood orange and vanilla margarita.

The team at this progressive restaurant, whose concept is based on eating according to the seasons, includes culinary director Demetrio Zavala, who also oversees the restaurant’s second location in Newtown, Pennsylvania. He has competed in and won several Food Network TV competitions, including “Chopped: Grudge Match” and “Chopped: Beat Bobby Flay.”

Dylan Dinsmore, formerly of CdM Restaurant, will lead the libations program with a wine list of about 150 American and global selections by the bottle and the glass. He’ll oversee a craft cocktail list with a zero-proof mocktails component.

Opening: February at The Boardwalk in Irvine, 18555 Jamboree Road. 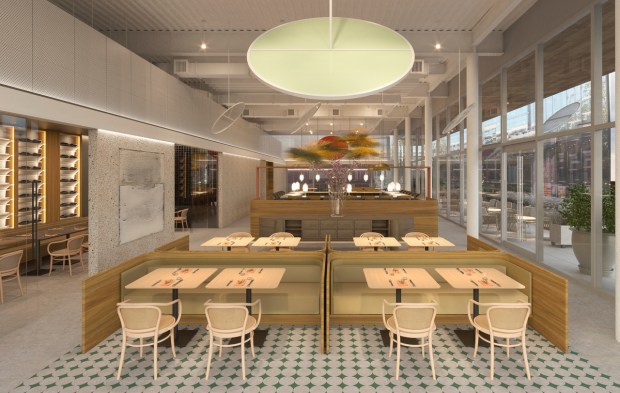 Solstice, a restaurant with an entire concept built around the practice of eating according to the seasons, is coming to Irvine in February. (Courtesy of Preen)

This spot, inspired by Alicia Cox’s daughter Sahara, who loves volleyball, will be near the volleyball courts and have a youthful vibe — maybe even with roller skating servers delivering pizza, beer and shaved ice.

It’s the latest in one of three openings Prjkt Restaurant Group revealed with California State Parks along a 3.5-mile stretch of Huntington State Beach as part of a long-term partnership to elevate beachfront dining and recreational experiences. Huntington Beach House opened in July and California Fork and Spoon is slated to open by year’s end.

Word just in that Elvis Morales, current executive chef of CdM, will be executive chef when A Crystal Cove opens this spring. River Jetty Restaurant Group, known for A Restaurant and A Market in Newport Beach and CdM Restaurant in Corona del Mar, announced in July that its fourth Orange County dining concept, would be coming to the Crystal Cove Shopping Center.

The interior will mix “old Hollywood glamour and conjure chic New York City and San Francisco-style hotspots” with features such as “an eye-catching bar, plush banquet” and a beachy color palette. Expect  a “greatest hits” selection of favorite dishes from A Restaurant and CdM Restaurant including the Spicy Yellowfin Tuna, Cacio e Pepe and Chicken Piccata.

Like The 908, its sister restaurant in Long Beach, The Goldfinch is expected to be a place for power lunches and business dinners as well as a gathering spot for locals. It is the second restaurant for owners Juan Guerra, Ciaran Gough and Todd Miller.

The 908 website touts the kitchen’s “Classical American Cookery” with a seasonal menu that includes steaks, seafood, salmon, fried chicken, lobster mac and cheese and other dinner entrees. The bar serves a selection of craft cocktails. 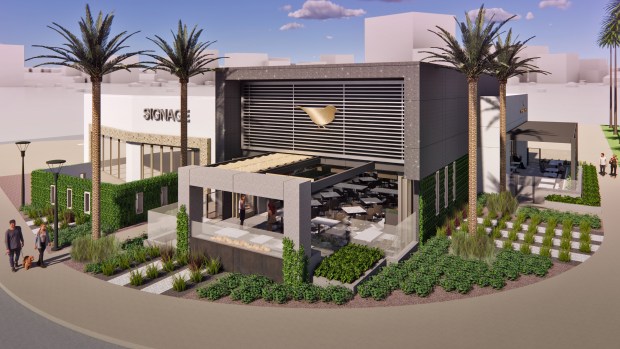 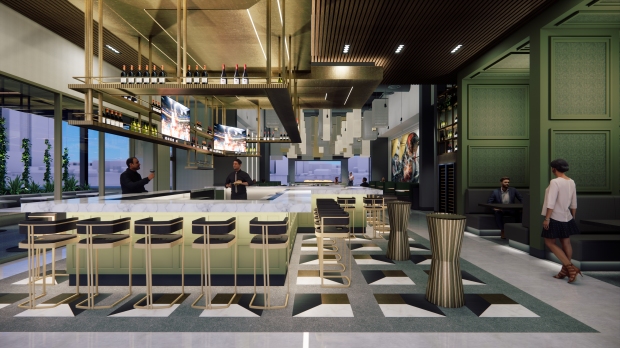 The Goldfinch in Irvine is on track to open this summer. (Artist’s rendering courtesy of Robinson Hill Architecture, Inc.)

World Pizza Champion teammates John Arena and Chris Decker will create a menu with whole pies and pizzas by the slice, as well as salads, paninis, charcuterie, cheese plates, soft-serve desserts and regional craft beers and wines at “approachable” prices.

Special features of its look, by Ted Berner and Dayna Lee of Powerstrip Studio, include an exhibition kitchen, garden and rooftop space. 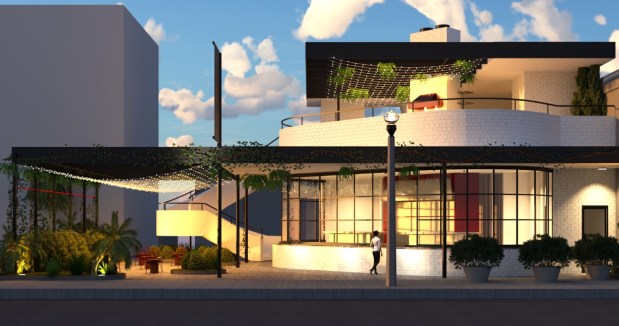 Brothers Michael and David Rossi (The Ranch Restaurant & Saloon in Anaheim) and husband-wife team Ed and Gabbi Patrick (Chaak in Tustin and Gabbi’s Mexican Kitchen in Orange) will bring together coastal Mexican and Mediterranean cuisines with a new concept based on the “Baja Med” trend.

The wine list will showcase Mexico’s finest bottlings and the woodfire kitchen will bring out the best of local and seasonal ingredients. The restaurant will have “a coastal influence” and “airy indoor and outdoor dining spaces.”

This place will serve burgers, shakes, fries, burritos and pizzas in an organic, vegetarian take on classic American fast food, started in 2015 by the founders of Amy’s Kitchen.

There are three locations in Northern California, including one at the San Francisco airport, with lots of tempting indulgences. Some items can be prepared vegan and all can be served gluten-free. 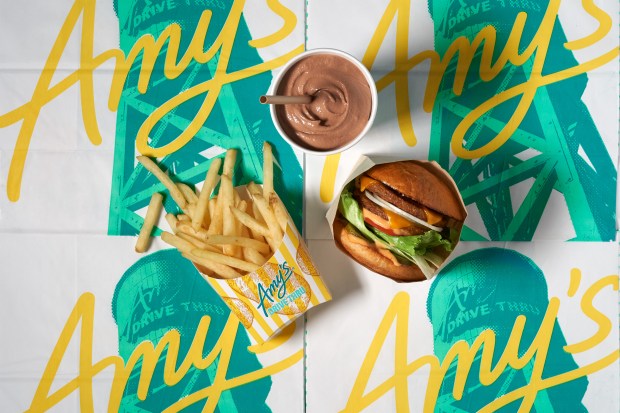 Not many details yet but Angelina’s Pizzeria Napoletana will bring its popular pies to the space that was Pizzeria Ortica in Costa Mesa, Zov’s will open a new location in San Clemente and Patina Group alums Ross Pangilinan and Nicholas Weber will open Populaire, a “modern bistro with French influences,” in South Coast Plaza.